When I sat down to write this piece about my thoughts on the upcoming installment of the Battlefield franchise I actually had to change the title several times. The title is an important initial impression for the reader as it sets the tone of where the content is going to take them. Perhaps no other game in recent memory has been so divisive, so politically charged, so opinionated, as to simply utter it’s name, or put it as a title of a blog post or video, is to catalyze emotional reactions from across the entire length and breadth of the gaming community. My thought process went from “Playing with Dice” to “EA’s Dangerous Game” to “The Battlefield and The War”. In the end however, I decided a simple “Battlefield V Beta Review” was probably the safest option if I was to discuss the game objectively at all and not have the post dismissed out of hand as being somehow alt right propaganda. With that said, here is my objective review of the game itself.

Full disclosure: I am a Battlefield, and LAN party veteran. At one point in history you simply couldn’t have one without the other and I can honestly tell you as a first hand source, Battlefield 1942 was nothing short of a phenomenon when it was released back in 2002. In an environment where the biggest map most gamer’s had ever played was Dust on a mod for HalfLife called Counter Strike, and the only vehicles they had ever used in game was a glitchy APC in de_prodigy, 64 player all out war with massive maps and an array of vehicles to pilot was nothing short of a tectonic shift in gaming as we know it. Now does that taint my opinion here? Am I just comparing the latest installment with the “good old days” seeing 1942 through rose coloured glasses and blind to everything that V does well? – Maybe, however regardless of your own personal feelings towards this game, the numbers seem to indicate that I certainly am not the only one to have reservations about this game. Objectively, the game so far has not been received well, and that is, right or wrong, an established fact. Do I feel as though I am bias though? No, certainly not. But in the interest of giving you an honest review of this game, I’m laying it all out there.

Disclaimer: Yes this is a game that is still in Beta, and there may possibly be vast changes between now and it’s release. This review is a review of the Beta itself and not the game as a finished product. Truth be told, there is a lot more I could talk about with this game than what I’ve documented here, but I’ve tried to stick to the main points and be as objective as I can. 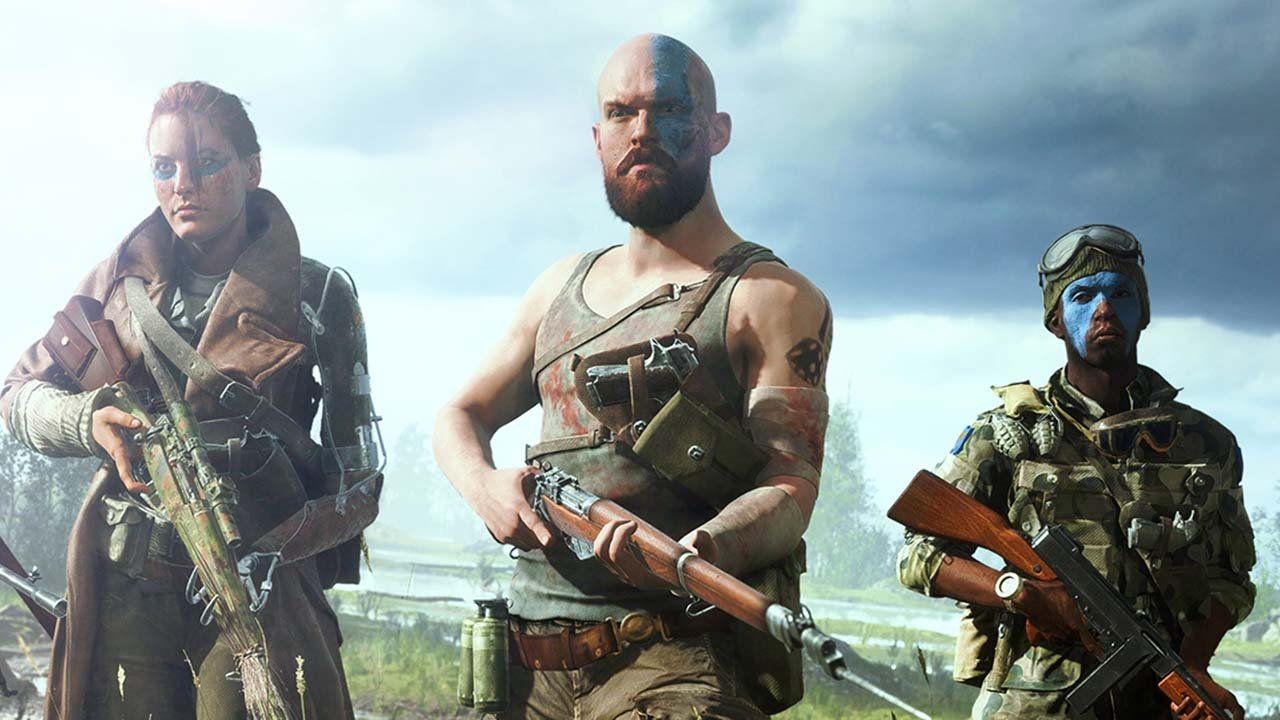 First Impressions: Aesthetically, if I’m brutally honest here, the game simply does not “feel” like a WW2 environment. Yes there are WW2 weapons in play, yes there are period accurate buildings and cars parked outside, yes there are period accurate vehicles to pilot such as Bf109’s and Spitfire’s, but the entire package is wrapped in these very colourful and vibrant pallets that simply don’t serve to sell the concept of a WW2 Battlefield. Often people will cite BF3’s infamous “blue lens filter” as being something that people either loved or hated in that installment of the franchise, in this instance the bizarre colour choice for this game is something I’m sure people will be talking about for sometime, which is compounded by bombastic and simply outlandish cosmetics EA/Dice have decided to use for the infantry. From colourful facepaint, to leather jackets that would look more at home in the 1980’s then the 1940’s, it simply isn’t immersive and it’s hard to see it as anything but a means by which EA/Dice can make money from microtransaction’s. It really is hard to justify for it as anything else as it simply doesn’t actually add anything to the gameplay, or immersion. The “building” aspect of the game, in my opinion appears, at least on the surface, at least in the Beta, as little more then attempt to ride off the back of some of Fortnight’s success by pandering to perhaps some of the younger market who are more used to playing games like Fortnight then Battlefield. In my opinion the building of sandbags etc appeared to do little more then detract from the core of what Battlefield has been, and just take gamer’s away from the actual act of fighting Battle’s.

The second thing that really struck me playing the two maps on offer, was the extremely limited use of vehicle’s. For a franchise that was built on the concept of large, open battlefields, traversed and fought over via intense mechanized warfare, the vehicle play really is breathtakingly underwhelming. We’re talking single tanks here. Yes I understand it’s a Beta, but these are completed modes and maps, unless they are going back to the drawing board, if this is the Beta, I have to assume this will largely be the game in this regard which is just a massive shame, especially considering the franchise is going back to it’s roots by releasing a WW2 themed title. It’s really just an opportunity missed in my opinion. And before moving off the topic, the maps size was equally underwhelming, in fact in “Arctic Fjord” which was apparently the biggest map on display, was so small that bomber pilots seemed to have a hard time lining up for targets before abruptly having to make a sharp turn just to not go out of map. It really felt like a Call Of Duty map with planes at times. But the issue’s certainly didn’t stop there, and I’m sorry to say that it wasn’t typical thing’s you would forgive a Beta for, they were “working” features that were just bad idea’s. For example the spawn screen, which I won’t go into here but needless to say was a great example of needless resources spent on redesigning something that really didn’t need redesigning and creating a lot of frustrated gamer’s in the process.

The last thing I’ll add in regards to my first impressions before moving onto the review criteria, and although it’s not entirely gameplay is the bizarre approach EA/Dice has taken in censoring certain words and phrases in the chat. One of the first things I noticed joining the Beta and seeing the chat was the significant amount of ******* in the chat. And people simply being amazed that certain things were being filtered. If we’re talking about first impressions here it’s really something that as someone playing the game for the first time couldnt help but notice. Never has this been a feature in any other Battlefield title so of course its going to help form peoples first overall impressions of the game. And it does give an interesting glimpse into EA/Dice’s mindset. Most of you reading this already know much of the controversy surrounding this game, Patrick Soderlund’s comments and subsequent resignation etc, however it’s worth mentioning as it did form my first impressions of the game. So, apparently “DLC” is a censored word, unless the word “free” is placed in front of it, similarly, “Titanfall” is also filtered as too is “White man” for some bizarre reason. “Asian man”, “Black man” is acceptable, “Gay” “Homosexual” is censored, however “Lesbian” is not, and also “Hitler” and “White Supremacist” is perfectly fine, but “Nazi” apparently is something they feel should be filtered, despite playing a game where you are actively fighting Nazi’s. – Again, this didn’t inform my review as it relates to the gameplay, but it is something I couldn’t help but notice upon first firing up the game. 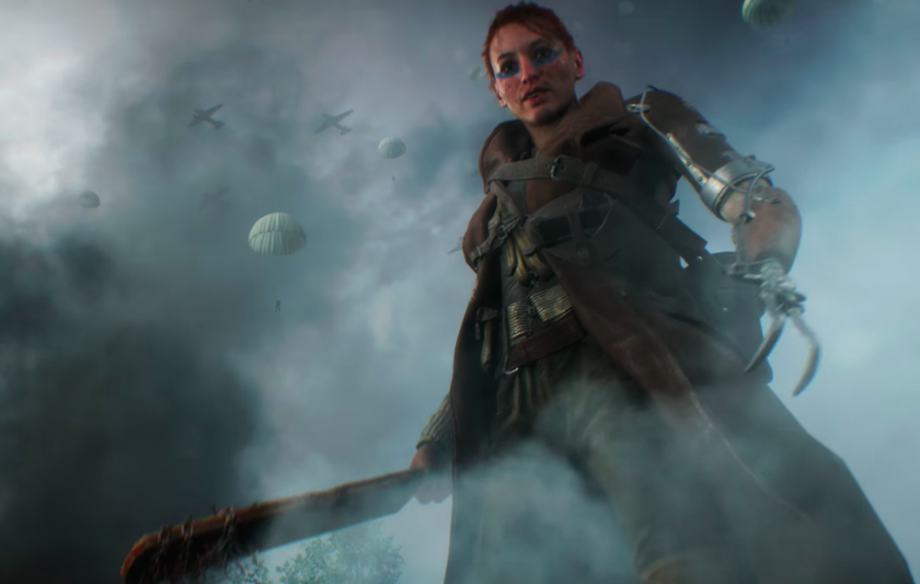 GUNPLAY: The gunplay, despite what other’s have reported, in my opinion was really not that great, for these key reasons: Firstly, the guns as a whole were fairly even, however there were exceptions, such as the STG44, which was simply OP. There really is no other way to describe it, if you came up against it, the gamer with the STG44 won 9 times out of 10. Secondly, and this is something that LevelCap has raised and I’ve seen several streamers complained about, and that is the difficulty in being able to see targets, despite how “arcadey” the gunplay is, either due to camo, or due to poor lighting in some parts of the map, or things like it snowing inside buildings.

GRAPHICS: Unfortunately, despite the Frostbite engine being more then capable of creating beautiful worlds, I really just didn’t feel like there was anything new to look at in V, it really did just look like a BF1 reskin. And even then, to be brutally honest, it just simply did not look that hot. Side by side to Battlefield 3, a game which was released in 2011, honestly in some cases I actually feel like BF3 looks better. Unpopular opinion? probably, but that’s just my honest opinion.

AUDIO: This is one aspect of the game I really felt they did a great job on. The soundtrack appears descent so far, although, I along with the fanbase I’m sure would of appreciated a new adaptation of the old classic 1942 theme, but otherwise not bad. The sound as it relates to the bullet effects, explosions etc were on point. Probably the best I’ve heard in a Battlefield game so far.

LEVEL DESIGN: As I mentioned before, while the flow of the maps, and overall design wasn’t terrible, the two maps available for the Beta didn’t inspire me with confidence either. My biggest grievance was the size, and as stated previously, lighting in some aspects of the maps, as well as weather effects like snow falling inside roofed buildings. I dare not be too critical of this aspect of the game however as it is just the Beta and only a small sample size. But for the two I played, underwhelming would be the word I would use.

CUSTOMIZATION: While there was a descent amount of customization for both soldiers and weapons, the way it has been designed seems a little contrived, with weapon upgrades such as “faster bullets” that just sound silly. I dont want to speak too much to the customization for the guns etc as again it is Beta and a lot will change, and there was a lot we simply no doubt simply didnt get to see here. I will say however that the infantry cosmetic customizations look rediculous, with germans wearing what appear to be hockey masks, ground infantry wearing pilot masks, and goggles… goggles everywhere. Do yourself a favor, go through some of the footage on youtube and count goggles lol. On one soldier there appeared to be several just for good measure. 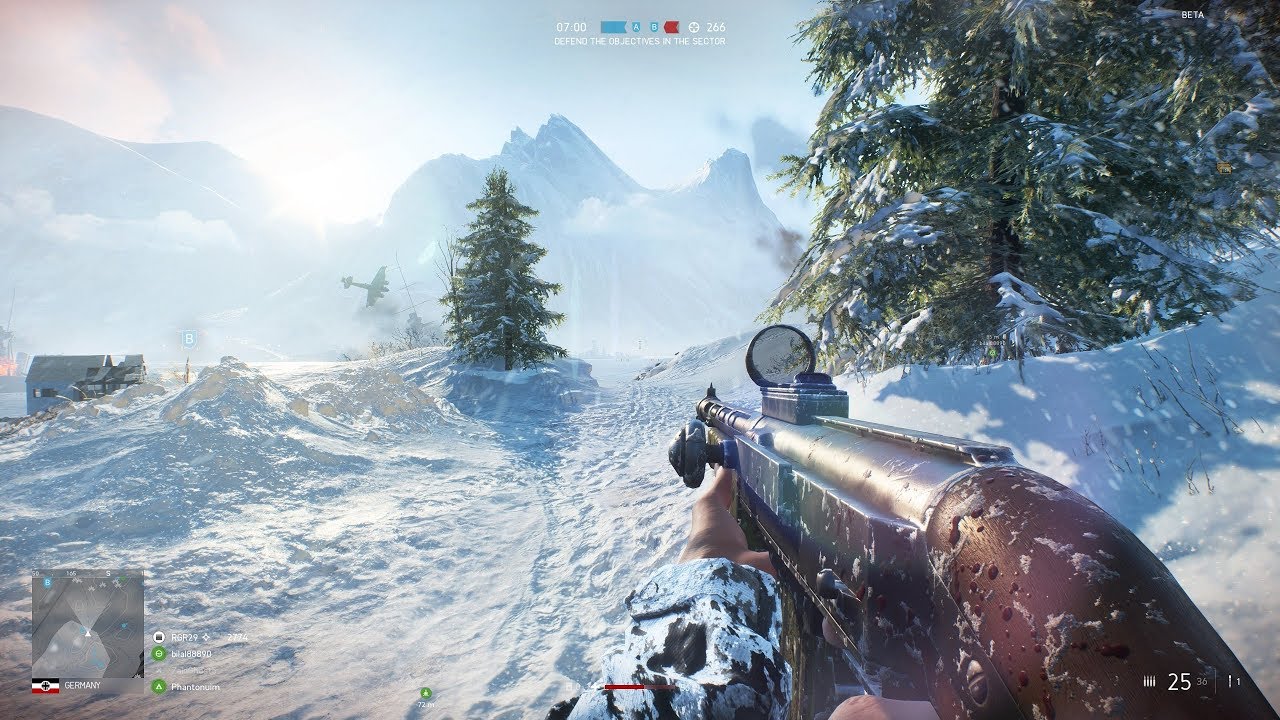 In conclusion: Controversy aside, in it’s current state I just can’t see myself recommending this game as a buy, certainly not as a pre-order. Perhaps the new Battle Royale mode might entice a few people to jump into it, personally, I just feel the harder they try to bank off other games successes, the less they seem to be able to hold on to what made Battlefield great in the first place, which is a tragedy, particularly for a Battlefield that is going back to it’s 1942 roots.